Birthmark Removal – Best Procedures + Before and After Care

Birthmarks are spots that usually appear on the surface layer of the skin and often in areas of the body such as the face, shoulders, and hands that are exposed to more sunlight. These spots usually become darker and more prominent after the skin is exposed to the sun, and on the other hand, they become pale and less visible in the winter months. Birthmark removal is a term applied to all sorts of procedures that aim to do just what the name says.

How Do Birthmarks Form?

Birthmarks are usually created as a result of the production of melanin pigment in a larger amount than usual in some parts of the skin. They also may form as a result of abnormal vessel enlargement in the affected area. In both cases, a birthmark removal procedure can be effective in helping the problem.

The common risk factors that contribute to the formation of birthmarks include:

Birthmarks are basically a genetic complication or rather predisposition, and they appear especially in people who have fair skin. Scientific research proves that the severity of being affected by birthmarks is the same in identical twins, who are genetically identical, but this is not the case in non-identical twins.

Spots appear as skin discoloration and darkening in the hands and to a lesser extent in the face. These spots look like simple birthmarks and appear mostly on the skin of adults and elderly people who have been exposed to the sun a lot throughout their lives. Benign skin patches known as seborrheic keratosis are quite common in people over 40 years of age.

How Do Birthmarks Develop?

The spread of birthmarks on the skin occurs as a result of two main factors, including genetic predisposition and exposure to sunlight. Of course, the amount and intensity of being affected will not be the same between two different people who have been exposed to the same amount of sunlight. Sunlight and some artificial light sources emit UV rays. The epidermis, or the surface layer of the skin, becomes thicker due to exposure to these ultraviolet rays, and pigment cells or melanocytes produce more melanin pigment.

In fact, increasing melanin production is the skin's way to protect itself from sunlight and ultraviolet rays. This explains why these types of birthmarks never appear on the skin of albinos because they are unable to produce melanin pigment in their skin due to a genetic predisposition. On the other hand, people with darker skin colour are relatively less sensitive to sunlight compared to people with light skin.

Birthmarks generally do not pose any risk to a person's health.

In rare cases when birthmarks are associated with the effects of rare hereditary diseases (such as xeroderma pigmentosum or neurofibromatosis), it is necessary to follow up and treat the main disease as well as having a birthmark removal procedure.

Lentigo Maligna – is a type of skin cancer that occurs as spots with an unusual shape and a very slow growth rate on the facial skin of elderly people who have a history of exposure to sunlight for a long time.

The most common methods of birthmark removal include:

There are several types of lasers that can be used to reduce or completely remove various types of birthmarks, moles, and skin spots. The durability and longevity of the results with this method of birthmark removal depend on the type of laser used as well as the type of skin spots that are being treated.

How Does Birthday Removal by Laser Work?

First, the skin is cleaned and disinfected, and then a cold gel is placed on the skin to improve the heat conduction. You will also be given a pack containing cold air to put on the area during the procedure to cool the skin. Then the laser is placed on your skin that fires a short flash of light at each mole or birthmark on the skin.

Peeling with chemicals can be used as a treatment for some birthmarks and their removal. In this procedure, first, the material used for exfoliation is applied to the area, the entire surface of the skin must be uniformly covered with this material. This way, the therapeutic effect of the exfoliating agent will be seen in improving the skin structure and fading or completely removing the birthmarks or moles.

The method of freezing or burning with liquid nitrogen can only be used to treat certain types of birthmarks and skin spots. Not all types of birthmarks and skin spots respond well to liquid nitrogen, and ironically one of the side effects of going with this method is the increase of the spots or the darkening of the colour of the spots that were already on the skin.

Abrasion with radio waves has very high efficiency in birthmark removal. But at the same time, one of the big disadvantages of this method is the permanent damage to skin pigments, which may consequently cause the skin of the operated area to have a lighter colour than the surrounding areas in the future. 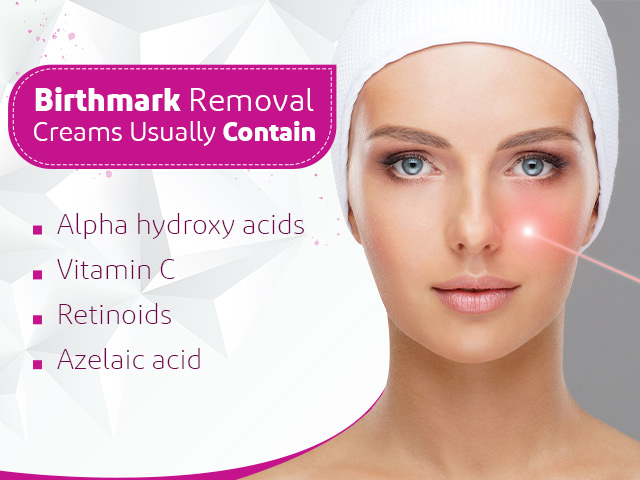 In the composition of these creams, there is usually a substance called hydroquinone or antioxidants including the following:

It should be noted that the skin must be protected from sunlight before and after birthmark removal using this method.

Birthmark removal by laser is by far the most effective, most convenient, and least painful birthmark removal procedure that offers clean results with the least amount of possible complications or side effects. As in any other procedure, paying close attention to birthmark removal before and after tips and guidelines can make a difference in the quality of the final results the client will receive.

Birthmark Removal Before and After

Before the treatment, it helps to come to the clinic with clean skin. Avoid applying creams or makeup on the area that is to be treated. After the procedure avoid exposure to sunlight and heat and if advised, use the creams and ointments prescribed. In order to enjoy the full benefits of the best birthmark removal and mole removal methods available, paying attention to before and after care and maintenance guidelines provided specific to your case can be extremely helpful.

In many people who use laser surgery to remove birthmarks and moles, immediately after the operation, the colour of the operated area becomes slightly darker. This colour change actually confirms that the pigments have been successfully destroyed and removed by the laser.

But this is no cause for alarm as within a day or two after the operation, the coloured spots turn light brown and then gradually fade within a week or two.

Full recovery after birthmark removal by laser requires about one and a half weeks. The recovery period after this operation includes several specific stages:

Can birthmarks be removed?

Yes, there are a number of effective ways to remove most types of birthmarks and moles in a safe way.

Laser treatment to remove moles and birthmarks is not painful at all. Local anesthesia before the operation may be used. A little tingling pain may be felt; But as soon as the work starts, the patient will not feel the laser at all. Before starting the procedure, the therapist will test to see whether the area is numb or not.

Exfoliation with chemicals to remove skin colour spots (dark spots) caused by sunlight or other skin complications such as pimples, acne, fine wrinkles, scars, or aging can be effective but usually comes with a host of unpleasant side effects. Chemical peels can be used to treat skin problems in the face, neck, hands, arms, and legs. There are also different types of chemical peels to be used for different depths of the skin, including surface peels, medium depth peels, and deep peels.

While birthmarks can be beautiful manifestations of variety, plurality, and self-expression, some of us may decide to say yes to a birthmark removal procedure that is highly effective and safe. Birthmark Removal by laser is one such treatment. Here in Brilliant Skin Australia, we offer the best type of laser treatment for birthmark removal available today.